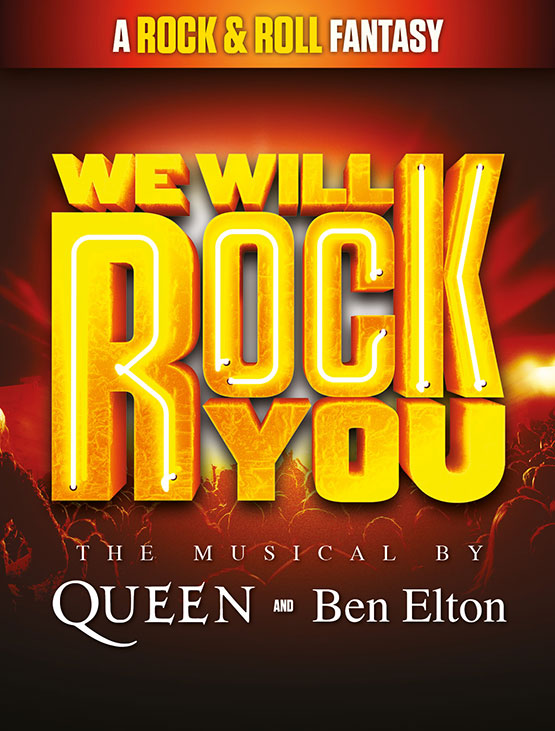 DO YOU WANT IT ALL? WE WILL ROCK YOU IS MORE THAN A TITLE, IT’S A PROMISE!

A brand-new reimagined production of Queen and Ben Elton’s multi award-winning rock musical We Will Rock You is now rescheduled to rock Montecasino’s Teatro and the Artscape Theatre Centre in 2021!

This revolutionary rock musical tells the story of a group of bohemians attempting to Break Free from their conformist reality, ruled by the Killer Queen in world with no instruments or rock music. Featuring 24 of Queen’s greatest hits, WE WILL ROCK YOU takes you on a journey of freedom, love and the return of rock music!

The first true rock musical, We Will Rock You hits all the right notes with some of Queen’s greatest hits LIVE including; Radio Ga Ga, A Kind of Magic, Another One Bites the Dust, We Are the Champions, Bicycle Race, Bohemian Rhapsody & many more!

WE WILL ROCK YOU reflects the scale and spectacle that marked Queen’s iconic performances! With Queen’s Brian May and Roger Taylor as music supervisors for the musical, the live seven piece band behind the cast will rock you as fiercely as the best of Queen’s concerts!

Galileo, Scaramoche and Killer Queen are a few of the leading characters who will take audiences on a journey into the future. South Africa, are you ready to rock? Book now ONLY at Computicket, call 0861 915 8000 or book online at www.computicket.com

PENSIONER’s DISCOUNT – Wednesdays & Sundays 18h00 @ R250.00 per ticket (subject to availability) on the top two ticket prices. Sunday 14h00 pensioner discount is limited to: Teatro Row U and ZC. Artscape Row Q and U, subject to availability. Tickets may only be purchased from a Computicket outlet or at the Box Office subject to presentation of a valid ID. Only one ticket per valid ID.

Sign up to our  newsletter for all the latest news, competitions and
discounts on our shows!